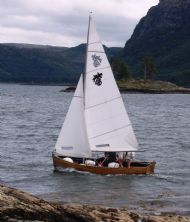 Plockton Local Boats are open-decked clinker built wooden hulls. Typically boats are sailed 'two–up' but on windy days a third crew member is often included for extra ballast. Originally gunter or gaff rigged with wooden spars and sails made of cotton, today these have been replaced by light aluminium spars, bermudan rigs and custom made synthetic sails. Although the hull and rig do not conform to a strict ‘one design’, the club’s rules do limit hull length (15 feet waterline length), keel depth (6 inches) and sail area (16.53m2). The oldest boats sailing in the fleet today are well over 100 years old and many boats within the club have been handed down through generations of the same families. When sold, every effort has been made to sell the boat locally and the best performing boats are of course highly coveted. Over the years, as new boats have been built, designs have been refined in the hope of creating a faster or more seaworthy boat and the boat builders able to produce a winning design soon developed prized reputations.

For many decades a substantial number of the boats were built by ‘John MacKenzie & Son’ of Portree. These boats were the mainstay of the club for many years and still comprise roughly half of the current fleet, even though the last of these were built in the late 1960s.During the 70s no new boats were built and the numbers participating in races diminished. However, the 1980s saw a revival in building of Plockton Local Boats, initially built by Malcolm Hendry of Carbost (Skye) with three others being built in Caithness by Peter Matheson, several others subsequently on Skye and one  built in 2001 in Plockton by two club members. Most recently boatbuilding has again begun in Plockton thanks to the Am Bata project, hosted by the Technology Department in Plockton High School. Further details about this exciting project are available at http://www.am-bata.org

Due to variations in design and construction each boat has a character and reputation and a local system of handicapping has evolved with each boat sailing to an individual handicap. This system has been adjusted and recalculated many times over many years, to help ensure competitive fleet racing and, unsurprisingly, has been the subject of many long hours (and years) of lively local discussion!