The inaugural meeting of the Plockton Small Boat Sailing Club was held on 28th August 1933, to provide racing for what subsequently became known as ‘Plockton Local Boats’. Twelve boats competed in the inaugural regatta in July 1934 and KJ MacKenzie became the first winner of the prestigious Plockton Trophy, which had been presented to the club by Roddy MacKay and Donald Gillies, in honour of their fathers “true men of the sea”. 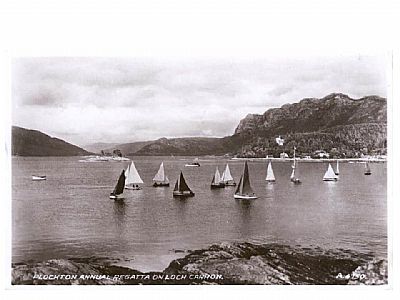 After the success of the early years of the club more cups were gradually added and in 1947 the annual regatta was extended to two weeks. By 1957 centreboard dinghies were admitted to compete alongside the local boats in some races and in 1965 they were fully included in the race calendar with their own trophies.

In the mid 1980s after a club fund raising drive, an old byre on Bank Street was converted into the Club’s Rescue Boatshed. The 1980s also saw the arrival of club-owned boats for the first time – a fleet of 6 Toppers to begin to deliver RYA training courses. In 2010 the club’s fleet of training boats was boosted by the arrival of 4 RS Fevas and an RS Vision funded by a donation and match funding from the National Lottery ‘Awards for All’.

Today the club’s ‘Local Boat’ and centre board dinghy fleets continue to compete and prosper and a dedicated junior race series has also been added to the club’s busy racing calendar which now extends from May to September. In February 2013, PSBSC kick started the celebrations to its 80th anniversary year by being awarded the RYA Scotland ‘Club of the Year’.